At the beginning of the second full week of the general election contest, Barack Obama delivers a message about competitiveness in Flint, Mich., a city known for economic hardship. Later he’ll hold a rally in Detroit.

Chris Christoff of the Detroit Free Press previews both events, which are meant to help Obama reach out to working-class Americans.

Although he did not campaign in Michigan during the primaries due to sanctions imposed by the Democratic National Committee for holding an early nominating contest, the state is one that Obama is hoping to take in November. Newsweek’s Richard Wolffe looks at the Obama campaign’s 50-state approach, which is likely to force John McCain to spend money even in states that are leaning Republican in the general election.

And the Los Angeles Times’s Michael Finnegan examines recent polls and finds that women may be increasingly moving from Hillary Clinton’s column to Obama’s.

The Times’s Jeff Zeleny and Jim Rutenberg illuminate Obama’s management style, which, they write, is a combination of hands-on chief executive and detached delegator: Like most presidential candidates, Obama is developing his executive skills on the fly, and under intense scrutiny.

The evolution of his style in recent months suggests he is still finding the right formula as he confronts a challenge that he has not faced in his career: managing a large organization. The skill will become more important should he win the presidency, and his style is getting added attention as the country absorbs the lessons of President Bush’s tenure in the Oval Office. Bush’s critics, including former aides, have portrayed him as too cloistered, too dependent on a small coterie of trusted aides, unable to distinguish between loyalty and competence, and insufficiently willing to adjust course in the face of events that do not unfold the way he expects.

The Washington Post’s Howard Kurtz profiles, Linda Douglass, the former television journalist who left her profession to become a traveling press secretary for the Obama campaign.

Obama spent Father’s Day in Chicago with his family. At a South Side church, he gave a speech on the problem of absent black fathers – an issue that he has brought up more than once on the campaign trail, The Times’s Julie Bosman reports.

The Politico’s Ben Adler notes the growing divide between Obama and McCain in the online campaign. 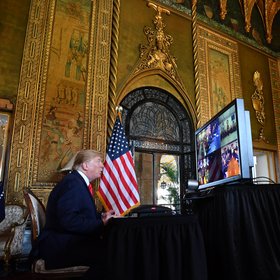