By FRANCIS WILKINSON From Nytimes.com/campaignstops Distributed by The New York Times Syndicate.)

SEATTLE – On the West Coast, we are the deepest of blue state America. We have ditched our badges of tribal politics for a post-racial era. We can break the padlocks of prejudice, and why not?

Thats what we tell ourselves.

But recent experience shows that campaigning with color is fraught with peril – even in the most liberal of precincts. As Barack Obama may soon find out, its OK to make history, to allow people to feel good while making history, to be an abstraction. But its quite another to be “the black guy.”

For a while, it looked like Obama could be the rare African-American leader whose race was nearly invisible – and he may still be. He’s post-Civil Rights, Oprah-branded, with that classically American blend of a mother from the heartland and a father from a distant shore. And after that Iowa victory speech, people felt something had passed into our collective rear-view mirror, without actually saying what that something was.

Now it looks like every mention of race – from the overblown dust-up with Senator Hillary Clinton this week to the calculated comments comparing him to Sidney Poitier – is bad for Obama.

A victory in South Carolina, with its heavy black vote, will be seen as one-dimensional. He needs people to look at him and see John Kennedy, or The Beatles, or Tiger Woods in his first Masters tournament. He needs people to see youth, a break with the past, style under pressure.

When they see black this or black that – even a positive black first – it’s trouble. I say this from the experience of having followed as a reporter two of the most talented African-American politicians in the land – Norm Rice, the former Seattle mayor, and Ron Sims, the chief executive of King County, the 12th most populous county in the United States, which includes Seattle.

In their earlier campaigns, race was not a factor because people were too nice, in our Northwest, Scandinavian-liberal tradition, to bring it up. And so it seemed reasonable that both men could step up.

Rice ran for governor, and so did Sims, in separate open elections. Rice lost to a man who became America’s first Chinese-American governor. Sims lost to a woman. In both cases, barriers were broken. But the ceiling seemed to remain only for blacks. What happened to them is what could lie ahead for Obama.

Obama understands this, and thus the truce on the subject has been called.

“I know everyone is focused on racial history,” he said at a church service last Sunday. “That’s not what I’m talking about.” Tuesday night’s Democratic debate in Las Vegas was supposed to be about black-brown issues, but race was quickly taken off the table.

“Sen. Obama and I agree,” said Hillary Clinton. “Neither race nor gender should be a part of this campaign.”

But race and gender will follow these two to the end. Conservatives believe Obama wouldn’t even be a top tier candidate were he not black – a reach, to anyone who has seen this once-in-a-generation politician on the campaign trail. Look at whats happened since race was injected into the campaign. What tipped it off was a debate over the roles that Dr. Martin Luther King Jr. and President Lyndon Johnson played in bringing about lasting civil rights changes. Hillary said one thing. Barack demurred. Blah, blah, blah. Race war!

Just like that, all the old unmentionables came out of the shadows. And just like that, voters gravitated to their respective tribes.

Obama beat Clinton among white women in Iowa, and Clinton was leading among blacks nationwide last year. Now it’s reversed – Clinton leading whites, blacks switching to Obama in droves. Hispanics are the wild card, and we’ll know a lot more after Saturdays caucuses in Nevada, where nearly one in four residents is Latino. Where all of this goes now depends on whether the race genie goes back in the bottle.

Again, history is a guide. The trick for a black politician in a nation where only 12 percent are African-American is to find a shared narrative. In the Washington governor’s race, the Chinese-American, Gary Locke, could call himself “a person of color” because his larger story – an immigrant’s son – was similar to that of so many voters.

With Norm Rice and Ron Sims, the narrative had to involve slavery, no matter how they approached it.

“I have a great story about how my family came to America, as good as Gary’s,” as Rice said. “We just happened to have different travel agents.”

Obama, with a father from Kenya, may have been given a pass in the minds of many white voters – no multi-generational racial baggage. He may still get that pass. But he has to be careful.

As the voting patterns showed in solid, Yankee, tolerant New Hampshire, people still seem to lie when it comes to race. Or maybe people who dislike black politicians just don’t talk to pollsters.

Whatever the reason, there is a gap, and it’s real. Strip away the nonsense that started this intra-family feud and you find one epic problem for Obama: how to make history, without mentioning what is so historic about his candidacy. 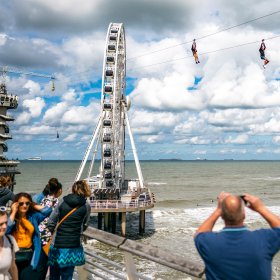