By JEFF ZELENY and JIM RUTENBERG

WASHINGTON – In the months leading up to Sen. Barack Obama’s big loss in the Pennsylvania primary, he was a detached manager: around, but not meddling. Rarely on early-morning conference calls with his senior advisers, he delegated most decisions to others and did not immerse himself in all of the nuts and bolts of running for president.

After that defeat in April, a friend gave Obama an urgent piece of advice: “Put your hand on the tiller.”

And that Obama did. He began participating in more strategy sessions; spoke out against a summertime gasoline tax suspension more forcefully than some advisers preferred; and last week was involved in conference calls that led to the departure of James A. Johnson, the man leading the campaign’s vice-presidential search.

He did not assign blame for the first big misstep of the general election campaign, participants said. But he asked his aides to assess the gravity of the problem and listened as they charted a course to proceed. Obama did not deliver the bad news – he seldom does – but he accepted the resignation of Johnson, who faced Republican criticism for getting cut-rate mortgages from the troubled lender Countrywide Financial Corp.

Like most presidential candidates, Obama is developing his executive skills on the fly, and under intense scrutiny. The evolution of his style in recent months suggests he is still finding the right formula as he confronts a challenge – one that will become more important should he win the presidency – that he has not faced in his career: managing a large organization.

The subject is getting added attention as the country absorbs the lessons of President Bush’s tenure in the Oval Office. Bush’s critics, including former aides, have portrayed him as too cloistered, too dependent on a small coterie of trusted aides, unable to distinguish between loyalty and competence, and insufficiently willing to adjust course in the face of events that do not unfold the way he expects.

Obama’s style so far is marked by an aversion to leaks and public drama and his selection of a small, core group of advisers who have exhibited discipline and loyalty in carrying out his priorities. The departure of Johnson, who was brought in to provide managerial experience to the vice-presidential search, was a rare instance of Obama’s campaign having to oust one of its own in the midst of a messy public crisis.

He reads widely and encourages alternative views in policymaking discussions, but likes to keep the process crisp. He is personally even-keeled, but can be prickly when small things go wrong.

As the chief executive officer of Obama for America, a concern of nearly 1,000 employees and budgets of hundreds of millions of dollars, Obama is more inclined to focus on the big picture over the day-to-day whirl.

He delegates many decisions, and virtually all tasks, to a core group that oversees a sprawling, yet centralized operation in his Chicago campaign headquarters, which going into the general election season is absorbing many of the political functions of the Democratic National Committee. Obama stays connected to advisers and friends via a BlackBerry, sending frequent but unsigned messages that are to the point. A discussion that can’t be conducted in a sentence or two is likely to be finished by telephone.

A night owl, Obama is known to send e-mail messages well after midnight. Laurence H. Tribe, his Harvard law professor who now serves as an informal adviser, said he received an e-mail message from the candidate at 1:30 a.m. on June 4, when he had received enough delegates to claim the nomination.

In interviews with more than two dozen senior advisers, campaign aides and friends, a portrait of Obama emerges as a concerned but not obsessive manager. By now, his associates have learned, there is no need to deluge him with unnecessary details, so long as someone knows them.

No state was more important to his candidacy than Iowa, but when he arrived there for campaign visits he stopped aides who tried to give detailed accounts of developments.

“I’d get in the car with him and talk a mile a minute,” recalled Paul Tewes, the campaign’s state director. “Last April, it was probably his fifth visit, and I’d been talking, he said, ‘You know what, Paul? All I want from you is for you to do your best, and I trust you. and you know what you’re doing.”'

On policy issues, Mr. Obama can have a photographic memory of intricate details, but he often struggled to remember the names of local political supporters he had met. A cool demeanor on primary election nights, even in defeat, can give way to a short temper when a speech text isn’t on the podium, a loudspeaker crackles or an aide hasn’t brought over a throat-soothing herbal tea.

Most high-level gatherings involving Obama are held either in his kitchen or at an office away from campaign headquarters, and are expected to unfold in an orderly manner. Written agendas and concise briefings are preferred.

He does not stir dissent simply for dissent’s sake, but often employs a Socratic method of discussion, where aides put ideas forward for him to accept or reject. Advisers described his meetings as “un-Clintonesque,” a reference to the often meandering, if engrossing, policy discussions Bill Clinton presided over when he was president.

“You don’t sit there for hours chewing on it and discussing it,” said Susan Rice, a foreign policy adviser to Obama who worked in the Clinton administration. “He’s very thorough, yet efficient about it.”

If a presidential campaign is intended to be a test run for the presidency, his chief priorities are the words in his speeches, messages in his television advertising and policy pronouncements. On other matters, even if he disagrees, he often allows himself to be overruled.

Obama was not thrilled with a campaign slogan, “Change You Can Believe In,” that was unveiled last September. And he did not initially like the campaign’s blue and white logo – intended to appear like a horizon, symbolizing hope and opportunity – saying he found it too polished and corporate.

“He made his concern clear, but said, ‘We have bigger fish to fry here,”’ recalled David Axelrod, the campaign’s chief strategist who was behind the logo’s design. “That’s one of his talents, his ability to distinguish between things that are absolutely essential and things that aren’t. He’ll give you some latitude based on your expertise.”

But Obama’s ease belies a more controlling management style. For all the success his campaign has enjoyed with grass-roots organizing, the operation is highly centralized around Axelrod; David Plouffe, the campaign manager; Robert Gibbs, the communications director; Pete Rouse, his Senate chief of staff; Valerie Jarrett, a longtime friend from Chicago; and a handful of senior advisers that has barely changed since he opened his campaign in January 2007.

Nearly all information is funneled to him, but he also makes his own inquiries.

Last month, only hours before he was scheduled to make his first campaign appearance before skeptical Jewish voters at a Florida synagogue, Obama received word that an important vote had been scheduled in Washington. He was needed in the Senate.

Obama was annoyed, but senior advisers traveling with him were livid at the prospect of the senator canceling a meeting with this critical constituency. Obama let them huff and puff, and began making calls himself.

Soon, he was on the line with Sen. Harry Reid of Nevada, the majority leader, who said he was trying to be accommodating, but his fellow senators needed to vote on a spending bill and military legislation before leaving for a long weekend. It sounded reasonable, Obama told his aides, and plans were made for him to fly to Washington and delay – not postpone – the meeting in Boca Raton, Fla.

Obama’s circle of advisers take seriously his “no drama” mandate. It is a point of pride in his campaign that there have been virtually no serious leaks to the news media – small leaks are immediately investigated – about internal division or infighting. He is a careful reader of daily newspapers and magazines (titles from Foreign Affairs to Maxim are stocked on his campaign plane). He takes his briefing books – three-ring binders filled with political memorandums and policy discussions – to his hotel room or home every night, but aides say how well he reads the materials may depend on what is on ESPN.

Obama has tried to learn from the mistakes of others. During the course of two long dinners at the Four Seasons Hotel in Washington this year and last, Obama sought the advice of Sen. John Kerry of Massachusetts. “We covered a lot of territory,” Kerry said, adding that he advised Obama to concentrate on his rapid-response operation. “I was as clear as I could be: You don’t let a moment go by unchallenged.”

Kerry said that Obama was a “quick study” who is as sure-footed on the national stage as he was new to it when he ran for president four years ago. Kerry, whose campaign was at times riven by division, said Obama’s operation seemed free of any such issues. “His staff is exceedingly loyal,” Kerry said.

These days, Obama pays little attention to his fundraising, a stark change from a year ago. “Barack was interested daily in knowing how we were doing, were we on track or were we not,” said Penny Pritzker, the campaign’s national finance chairwoman. After a record-setting first-quarter tally of $25 million, he stopped asking as much.

One area where he does not easily acquiesce is on speeches and television commercials, where he frequently rewrites words that shape the core message of his candidacy. Obama generally gives his ad-makers room to produce his spots, but he reviews all scripts and often reworks them if he believes they do not capture his natural speaking style.

“He’ll say, ‘That is not my voice,”’ said Jim Margolis, a senior media consultant to Obama who oversees television advertising. “Definitely this isn’t somebody you just throw the script to, and he’ll say anything that comes up on the screen. He tries to make sure that he’s got his imprint on it.”

Three days after claiming the nomination, Obama, who makes infrequent visits to the campaign’s Chicago headquarters, offered his gratitude by way of a motivational pep talk.

Before finishing, he included a self-assessment, adding, “I am going to have to be a better candidate.” 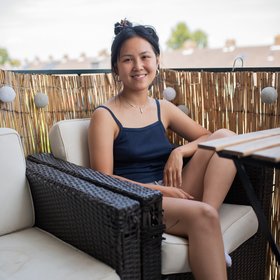