The first working day of a party convention is never going to be a comfortable one. Credentials will be misplaced, procedures will be unknown, and routes will be circuitous, often ending in the wrong place.

Even convention luminaries like Joe Scarborough, Al Sharpton and Bill Kristol got caught up in security hiccups in the morning, but they took it in good humor because it rarely ends in tears. Convention veterans know that it takes a while for the temporary village of a huge event to assemble itself. By Thursday, we will all know our place in the hierarchy, if not the world, and it will all seem routine. (And then it will be time to schlep over to Invesco Field and begin the process anew. Yeow. We can all see Invesco Field from the lots around the Pepsi Center, but the pragmatists among us know that you can’t get there from here.)

For the time being, everyone knows who the cool kids are – Barack, Hillary, Michelle, Bill – but no one knows where to stand. And this is a year of profound change in both political and media dynamics. The doors to the backrooms have been blown open, and a large rearray is under way.

And the age-old process of reporting no longer attains. For decades, the Bagger and his colleagues with notebooks and pens have stepped up to people, asked grave or silly questions and written down the grave or silly answers we got in return. But reporting has become a performance art. Each time there was a reporting stop – at a small McCain counterdemonstration, a Hillary counterdemonstration, or in the bloggers’ tent – the people formerly known as the audience refused to behave like one. They brandished video cams, iPhones and recorders, doing their own documentation of what was under way.

The reporting challenge was complicated by the fact that once you leave the bubble, Denver has very broad streets arrayed over a huge place. Tasked with hitting those mean streets, the Carpetbagger hopped on one of the free bikes being handed out by a do-good eco-group. The bike allowed him to get lost much more quickly.

Once he got off the bike, it was still tough to find his bearings. When the Bagger stopped to interview Max Loveless, a college Republican who was one of eight kids waving McCain signs – “Drill Now!” said one – three of his buddies whipped out video cameras and started filming the proceedings. When the Bagger stopped in the Big Tent and talked to Craig Newmark, the founder of Craigslist, a blogger nearby perked his ears up from three feet away and started live blogging the conversation. And when the Bagger noticed that Clinton supporters were staging a protest at MSNBC’s open-air studio behind Union Station, he stopped to ask a few people what the fuss was about and was immediately surrounded by a thicket of recording devices.

“I think when you think about the network democracy or participatory democracy thing, this is a turning point in American history,” Newmark said, “potentially realizing the vision of the founders of this country because they and we wanted a more direct form of democracy. And with the Internet, we can start moving a little bit more in that direction.”

What Newmark, who disrupted an entire industry with his free community of ads, said was all the more interesting because some of it was taking place as we spoke.

Conventions are derided as scripted affairs, but this one has no single script. The Clinton supporters in particular are unwilling to go along with what many see as a foreordained week. Their acronym, PUMA, stands for “Party Unity My (bottom),” and they chanted lustily about a stolen election, bad caucuses and traitorous leaders. In the backdrop of “Hardball,” they were enough to all but drown out Chris Matthews and his guests, forcing him to address the drama unfolding right behind him.

“I feel like the Democrats have not been practicing democracy,” said Jane Rizzo, a protester who came here from California. “I have been a Democrat for 30 years and have voted the party all the way down to dogcatcher. Not so this year.”

No one knows if she or her cohort will make good on that threat. And no one knows if the blog insurgency will overtake the consensus emanating from the big media buildings on the parking lot of the press center. It’s the first day, after all, and the knitting and bonding that will occur in the ensuing days may make vast chasms close up quickly. But right now, Denver feels less like one big tent than one that is under construction. 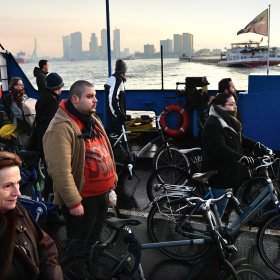