He had fallen in defeat in the 1980 Democratic primaries to President Jimmy Carter, but his speech was luminous and defiant. And as Kennedy’s words still echoed, she remembers, the men around her, laborers with the United Auto Workers, hurtled to their feet.

“These are fairly hard-nosed men and as they jumped to their feet these large hefty men were” – she pauses as she recollects – “crying.”

On Monday night, Rom, a delegate from Michigan, was the one in tears, as Kennedy, ailing with a brain tumor and buffeted by radiation and chemotherapy, journeyed perhaps a last time to the lectern of a Democratic convention. And once again the ailing senator brought 20,000 people in the arena to its feet for a sustained ovation.

His voice still a powerful instrument, even as the thick mane of hair has fallen away from the left side of his scalp, Kennedy summoned the crowd with his trademark Boston accent.

“And this November, the torch will be passed again to a new generation of Americans,” he said, promising that in January, he would attend Barack Obama’s inauguration as president.

Nothing about his journey to the podium had been easy. This weekend, he flew to Denver and then walked into a local hospital for a checkup. Doctors worried about how his immune system, compromised by rounds of chemotherapy and radiation, would respond to the flight, the altitude and the crowd. On Monday afternoon, his staffers told reporters that their boss would be a silent presence this night, as his niece, Caroline Kennedy, addressed the convention.

But for Edward Kennedy, who has worked conventions as a ward heeler for his brother Jack in 1960, eulogized two dead brothers and run as a candidate for president, such a silent denouement seemed difficult to conceive of.

So no one was much surprised, after Caroline Kennedy spoke of her “Uncle Teddy,” to see him hobble out onto the stage in the crab-like walk of his – a long-ago plane crash left him with lifelong back pain. (Convention aides had placed a stool behind Kennedy, but save for leaning on it for a second or two, he stood erect throughout his talk.)

“For me, this is a season of hope,” he told the crowd. “This is what we do. We scale the heights, we reach the moon.”

There is to a convention the feel of a ceaseless party, delegates tapping beach balls and boogalooing in the aisles. But Ted Kennedy is the perennial favorite uncle to this Democratic crowd, and the sight of him brought many to tears.

That speech in New York was 28 years ago, and as time is remorseless, not many delegates now were there. But J. Paul Taylor, blue-eyed and lean and 88 years old, sat in the New Mexico delegation and Monday afternoon recalled the man he heard speak nearly three decades ago.

Taylor, a former state legislator from Mesilla, was a Kennedy man, an idealist, as committed to his liberal candidate was to the business of tossing out the incumbent President Jimmy Carter and taking the liberal lance to Ronald Reagan.

“He gave a great speech” – Taylor balled his fists – “with a lot of gusto. He showed to me what a real man was, what a real liberal was.”

Three hours later, having heard Kennedy give what might be his last speech before a Democratic national convention. Taylor put his arm through another delegate’s arm and pulled himself, none too steadily, to his feet.

His eyes shined. “That’s the man I remember,” he said. “I am terribly moved.”

Former Rep. Mary Rose Oakar, also remembers being in that hall in 1980. Oakar watched him walking onto the stage and she started yelling.

“First of all, he’s electrifying,” she said. “And he’s never changed the pillars of his philosophy – and that’s what I love about him.”

Rom mentioned much the same, the sight of that man with a full head of dark hair and those piercing Irish looks conceding defeat after a bruising primary season. And then he gave a speech that is often numbered among the top 100 speeches in American history.

“It was so heartfelt and you felt that he was going to fulfill the goals we had as young people,” Rom said. “For people of my generation there was nothing like it. You felt the loss of what could have been.”

Kennedy walked off Monday night, shaking hands, kissing fellow pols and grandchildren. But that day in 1980, he ended by quoting Tennyson, and added:

“For me, a few hours ago, this campaign came to an end. For all those whose cares have been our concern, the work goes on, the cause endures, the hope still lives, and the dream shall never die.”

EDWARD M. KENNEDY: IN HIS OWN WORDS

Monday night at the Democratic National Convention in Denver, as transcribed by The New York Times. A full transcript: nytimes.com/politics

``My fellow Democrats, my fellow Americans. It is so wonderful to be here. And nothing – nothing – is going to keep me away from this special gathering tonight.

I have come here tonight to stand with you to change America, to restore its future, to rise to our best ideals and to elect Barack Obama president of the United States.

As I look ahead, I am strengthened by family and friendship. So many of you have been with me in the happiest days and hardest days. Together we have known success and seen setbacks, victory and defeat. But we have never lost our belief that we are all called to a better country and a newer world. And I pledge to you, I pledge to you that I will be there next January on the floor of the United States Senate. . . . . .

There is a new wave of change all around us, and if we set our compass true, we will reach our destinations. Not merely victory for our party but renewal for our nation. This November the torch will be passed again to a new generation of Americans.

So with Barack Obama, and for you and for me, our country will be committed to his cause. The work begins anew. The hope rises again. And the dream lives on.''

© The New York Times. All rights reserved. This article originally appeared on nytimes.com. 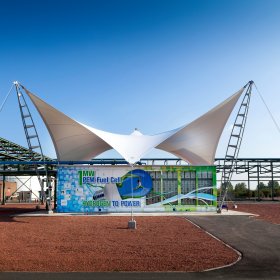