Lori Viars, an evangelical activist in Warren County, Ohio, essentially put her life on hold in the fall of 2004 to run a phone bank for President Bush. Her efforts helped the president’s ambitious push to turn out evangelicals and win that critical swing state in a close election.

But Viars, who is among a cluster of socially conservative activists in Ohio being courted by Sen. John McCain’s campaign through regular e-mail messages, is taking a wait-and-see attitude for now toward the presumptive Republican nominee.

“I think a lot of us are in a holding pattern,” said Viars, who added that she wanted to see whom McCain, R-Ariz., picked for his running mate.

Viars’ hesitation illustrates what remains one of McCain’s biggest challenges as he girds for a general election showdown with Sen. Barack Obama, D-Ill.: a continued wariness toward McCain among evangelicals and other Christian conservatives, a critical voting bloc for Republicans that could stay home in the fall or at least be decidedly unenthusiastic in their efforts to get out the vote.

To address this, McCain’s campaign has been ramping up its outreach to evangelicals over the last month, preparing a budget and a strategic plan for turning them out in 18 battleground states this fall.

The campaign has been peppering over 600 influential grassroots and national leaders in the evangelical movement with regular e-mail messages – highlighting, for example, McCain’s statement criticizing a May 15 decision by the California Supreme Court overturning the state’s ban on same-sex marriage, or his recent speech on his judicial philosophy. It has also held briefings for small groups of conservative leaders before key speeches. Charlie Black, one of McCain’s senior advisers, recently sat down with a dozen prominent evangelical leaders in Washington, where he emphasized, among other things, McCain’s consistent anti-abortion voting record.

McCain’s outreach to evangelicals has been a quiet courting, reflecting a tricky balancing act: his election hopes rely on drawing in the political middle and restive Democrats who might be turned off should McCain woo the religious right too heavily by, for instance, highlighting his anti-abortion position more on the campaign trail.

“If McCain tried Bush’s strategy of just mobilizing the base, he would almost certainly fall short,” said John C. Green, a senior fellow at the Pew Forum on Religion and Public Life. “Because the Republican brand name is less popular and the conservative base is restive, McCain has special needs to reach out to independent and moderate voters, but, of course, he can’t completely neglect the evangelical and conservative base.”

The instrumental role of evangelicals in Bush’s victory in 2004 over Sen. John Kerry is an oft-repeated tale at this point. Bush’s openness about his personal faith and stances on social issues earned him a following among evangelicals, who represented about a quarter of the electorate in 2004. Surveys of voters leaving the polls in the 2004 election found that 78 percent of white “born again” or evangelical Protestants had voted for Bush.

In contrast, McCain’s relationship with evangelicals has long been troubled. In 2000, when he was running against Bush for the Republican nomination, McCain criticized the tactics of certain members of the religious right and castigated Pat Robertson and the Rev. Jerry Falwell as “agents of intolerance.”

In a sign of the lingering distrust, McCain finished last out of nine Republican candidates in a straw poll last year at the Values Voter Summit in Washington, a major gathering for socially conservative activists.

James C. Dobson, the influential founder of the evangelical group Focus on the Family, released a statement in February, when McCain was on the verge of securing the Republican nomination, reiterating that he would not vote for McCain and would instead stay home if he became the nominee. Dobson later softened his stance and said he would vote but has remained critical of McCain.

“For John McCain to be competitive, he has to connect with the base to the point that they’re intense enough that they’re contagious,” said Tony Perkins, president of the Family Research Council. “Right now they’re not even coughing.”

The balancing act McCain faces in appealing to both moderate voters and evangelicals was starkly illustrated last month when he rejected the endorsements of the Rev. John Hagee and the Rev. Rod Parsley, prominent evangelical leaders, after controversial statements by the two came to light. Parsley has been vocally anti-Islam and Hagee, in a sermon, said Hitler and the Holocaust had been part of God’s plan to drive the Jews to Palestine.

McCain’s actions complicated his relationship with evangelical leaders, some of whom said in interviews that the senator’s actions contributed to the impression among some evangelicals that he does not know or understand them. They argued that he should have stood by them, while making clear that he did not necessarily agree with all of their views.

“I think that was a stumble that will add to the challenges here,” said Gary Bauer, president of the group American Values, who in February became arguably the most visible evangelical leader to begin actively working on McCain’s behalf and who was one of the few leading evangelicals to endorse McCain in 2000. “Those are both very influential men and it will just make things more challenging to accomplish between now and November.”

Unlike Bush, McCain is decidedly reticent about religion on the stump. McCain grew up Episcopalian and shifted to a Baptist church after marrying his second wife, Cindy, but has not been baptized into the denomination. And when asked about his personal faith at town hall forums, he often relates a familiar story. When McCain was a prisoner of war in Vietnam, a prison guard who had once loosened his bonds while he was being tortured sidled up to him on Christmas Day and drew a cross on the dirt in front of them. But some evangelical leaders say the account sheds more light on the guard’s faith than on McCain’s.

Nevertheless, a small group of McCain staffers and surrogates have begun ramping up, largely behind the scenes, his outreach to evangelicals and other social conservatives.

Former Sen. Dan Coats of Indiana, a graduate of Wheaton College, an evangelical Christian school, is also playing an active role, as is Sen. Sam Brownback, a Kansas Republican and a longtime socially conservative stalwart.

The initial outreach plans call for replicating the campaign’s approach in the Republican primary, creating “Family Issues Leaders for McCain” committees for each state made up of key social conservatives who have endorsed him.

About a dozen people, including staffers and socially conservative leaders who are advising the campaign, have begun a weekly conference call to plot strategy.

McCain’s advisers said they were in a talking and listening mode with evangelical leaders, as opposed to aggressively seeking endorsements, in part out of recognition that many Christian conservatives remained suspicious of him.

In a stroke of good fortune, McCain may be aided by Obama’s own problems among religious voters. Obama, who speaks comfortably about his own Christian faith, was once seen as the kind of candidate who could help Democrats close the gap with Republicans among weekly churchgoers, who voted for Bush in droves in 2004. But those efforts have been complicated by the incendiary remarks by Obama’s former pastor, the Rev. Jeremiah A. Wright Jr., and the comments by Obama at a fundraiser in the Bay Area about people in small towns clinging to guns and religion.

Nevertheless, the Obama campaign plans to add a full-time evangelical-focused staffer to its existing religious outreach team and is rolling out an effort over the summer to organize over a thousand house parties built around an hour-and-a-half-long curriculum that aides have devised on faith and politics. With the broadening of the evangelical agenda to include issues like poverty, global warming and AIDS, Obama’s advisers hope to peel off more moderate evangelical voters.

“I think Obama has a great opportunity still, with the Jeremiah Wright controversy behind him, to re-introduce himself with the American people, especially with his spiritual walk,” said David Brody, a political correspondent for the Christian Broadcasting Network. “I think the bio of Obama is going to have religious overtones, and McCain’s will not, and that’s going to stand out.”

In 2006, McCain was featured in television advertisements supporting a constitutional amendment to ban same-sex marriage in Arizona, but he argued vigorously against a federal ban on the Senate floor that year, breaking with Bush and the Republican leadership, citing his belief that states should decide the issue.

Many conservative activists revile McCain for his sponsorship of the McCain-Feingold campaign finance reform measure. Similarly, his support for federal financing of embryonic stem-cell research puts him at odds with many conservatives.

McCain’s supporters contend that if they simply outline McCain’s policy stances on issues that matter to social conservatives and make clear where Obama stands, the choice will be obvious.

“It’s my job to make sure the people out there in the leadership and the grassroots get a chance to know John McCain for what he really is,” Popma said. 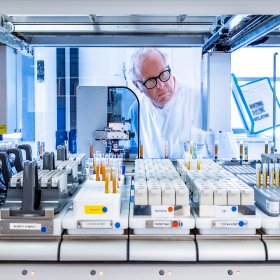