What's so good about our pension scheme?
'Let's remind ourselves what pensions are actually meant for. We want people to have a predictable income when they retire, safe in the knowledge that they will keep on receiving it until they die. The Netherlands is just about the only example of pensions being so well organised to deliver that particular goal. You have to save a lot of money that you won't need for decades to come. In the meantime, the future is uncertain and there will be many setbacks and windfalls. But you Dutch have a reasonably predictable income when you retire. That's very impressive. That's why the Netherlands is always in the top three of the best pension systems in the world, along with Denmark and perhaps Canada and Australia.

There is a lot of criticism. Young people complain they are paying for old people and don't know whether they will receive a pension. The old complain they are getting less and less.
'The financial crisis has forced some Dutch pension funds to lower the benefits they pay out. On average by 2 percent and some had to cut them by as much as 6 percent. But look what's happened here in the UK. We had a pension system that looked a bit like yours. But with one important difference: the benefits were cast in stone. They were inflexible. Such a rigid system couldn't withstand the financial crises. Only public servants are still able to save for a pension meaning a predictable income from retirement until death. There is hardly a single private sector employer that will offer a new employee access to the old defined benefits system.

'We now have a savings system. With the help of your employer, you save a certain amount of money yourself and when you're 65, you're given a big fat check. You can save the money, but since you don't know when you are going to die, you don't know how much it is safe to spend each year. If you buy an annuity - that is a guaranteed pension - it is very expensive, and its price is unpredictable. Over the past 15 years, annuity prices have risen up to 300 percent.

This is not to minimise the problems there have been in the Netherlands. The transition since 2008 hasn't been easy for you either but you still have lifelong pensions. My children, who work in the private sector, don't have any such provision.

'Flexibility also means you have to future-proof your pensions. That is not easy. Young people have to work longer because they will live longer and in better health. Pensioners are receiving less. But rather than allowing the collapse of the private pension system, you have been able to share the pain.'

There are also plans here to individualise pension accruals. Is that a good idea?
'Being as open as possible about people's pensions increases transparency. It's good that they know what to expect and that it sometimes has to be revised. But the collective nature of Dutch pensions is important to preserve. And ensuring they are managed by large, very professional pension funds make responsible investments. I know of APG, which invests pensions for the ABP civil servants' fund. It is many times larger than the largest fund in Britain, which should allow it to keep costs low.'

A large group of people is not taking part in 'probably the best pension system in the world': a million self-employed.
'We have the same gap. Actually I'm amazed that the large Dutch funds haven't opened up their pension schemes to the self-employed. You have a well-designed system and the self-employed should be allowed to benefit from it, too.'

Is there still room for improvement?
'What you need is far more and far better communication so that people understand that their future pension is a flexible promise. That's where it sometimes goes wrong. People must understand what it means if the wind is coming from the wrong direction. Can I make a comparison? Democracy is the worst system there is but we don't have a better one. And that's true about your pensions. Where they do have good pension systems, they look like yours.'

Do you know I was born in Scotland? Do you know who invented the pension? Two Scotsmen, like myself. Scots like to say they invented everything. But in 1744 Robert Wallace and Alexander Webster introduced the first pension, for the widows and orphans of Scottish religious ministers. It hurts to think the British have been unable to maintain this system and you Dutch have now taken the lead. That's just a joke, by the way.' 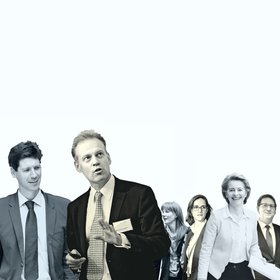