By ADAM NAGOURNEY and PATRICK HEALY

For all the lengths Sens. Barack Obama and John McCain have gone to in keeping their hunt for a vice president under wraps, their deliberations are in some ways being conducted in plain sight.

There was McCain appearing yet again with Mitt Romney, his former rival for the Republican nomination and a frequently mentioned possibility for the No.2 spot, in Detroit on Friday. In Indiana last week, Obama appeared with two of the more speculated-about names on Democratic lists, Sen. Evan Bayh of Indiana and former Sen. Sam Nunn of Georgia.

McCain walked down the steps of his chartered airplane in Minneapolis the other day to find Gov. Tim Pawlenty of Minnesota ready to introduce him to waiting dignitaries in front of a phalanx of cameras.

On his trip to Afghanistan this weekend, Obama was accompanied by two senators whose foreign policy acumen and similar positions on the war make them intriguing long shots: Jack Reed, D-R.I., and Chuck Hagel, R-Neb.

This is not, aides to both McCain and Obama were quick to say, the kind of vice-presidential off-Broadway run-throughs that some past presidential candidates – think Walter F. Mondale in 1984 – have forced potential running mates to endure.

But it is indeed calculated and does provide a chance for the candidates and their aides to assess how they and their prospective running mates look as a ticket, in the newspaper photographs and television images these events are producing. That is no small thing, as could arguably be seen in Bayh’s eyes last week as he cast a vice-presidential gaze at Obama.

And the accelerated pace of these appearances is a reminder that although both campaigns are going to great lengths to keep the process a secret – officials in both headquarters are fiercely competitive about which side will do a better job in preventing leaks – this search is moving into its endgame. Obama is likely to announce his choice the week before the Democratic convention begins on Aug. 25, party officials said. McCain is leaning toward announcing his as soon as the Democratic convention is over, though associates said he has not ruled out making the announcement before the Olympics begin on Aug. 8.

As the process unfolds, strategic imperatives for the two candidates have become clearer.

Members of both parties said Obama, 46, should not be looking to make any dramatic or risky moves that would divert attention from his role as the would-be head of a new generation of leadership seeking to make a clean break from the politics of the past.

By contrast, McCain, 71, has good reason to look for a choice that would change the landscape, a point that some of his own advisers are making to him.

“Republicans need to do something to shake things up,” said Steve Elmendorf, who played a significant role in the vice-presidential search as a deputy campaign manager for Sen. John Kerry, the Democratic nominee in 2004. “Barack is in a different situation, and he needs somebody who can be safe and steady.”

Ed Rollins, a Republican strategist who led Mike Huckabee’s presidential campaign this year, said McCain “needs to pick someone who will really energize and excite the party, but also someone with whom McCain feels a real comfort level and is young enough for those worried about the age issue.”

For Obama, there is no shortage of what Democrats describe as do-no-harm people he can pick: Bayh; Sen. Joseph R. Biden Jr. of Delaware; Nunn; or Gov. Tim Kaine of Virginia, who introduced Obama at a huge rally in Northern Virginia two days after he effectively won the nomination, and whom many Democrats see as one of the more intriguing names on Obama’s list.

Democrats said they thought it was less likely now than it was a month ago that Obama would choose Sen. Hillary Rodham Clinton of New York as his running mate, though they said she remained in consideration and that she was being vetted.

If he does not choose Clinton, several Democrats said, it would be difficult for him to name any woman – like Gov. Kathleen Sebelius of Kansas, someone for whom he has had warm words. Both Clinton and Obama advisers said such a move could create a backlash among women who supported Clinton.

Should McCain decide he wants to shake things up, his options would appear to be limited. Many of the biggest brand names in the Republican Party – like Colin L. Powell, Secretary of State Condoleezza Rice and former Gov. Jeb Bush of Florida – are politically tarnished or have signaled that they have no interest.

Other members of the take-a-chance-on-me category would bring baggage. They include Tom Ridge, the former governor of Pennsylvania and the nation’s first Homeland Security secretary. Ridge would help McCain compete in Pennsylvania – a state that is always close and that McCain would love to win.

But Ridge also supports abortion rights, which means that while McCain might gain some points in his continuing effort to appeal to independents, he would inflame conservatives who have never been happy about his candidacy.

Or he could pick Gov. Sarah Palin of Alaska. Putting a woman on the ticket would certainly qualify as shaking things up, with the added incentive of allowing him to make a play for Democratic and independent women who supported Clinton in the Democratic primary and are unwilling to shift allegiance to Obama.

That said, Palin is not exactly a household name, Alaska is not a state a Republican presidential candidate needs to worry about, and even some of McCain’s associates said she might not be prepared to be president.

By contrast, there is no shortage of presumably solid but more stolid possibilities: Romney, who might help him in Michigan, where he was born; Pawlenty, who could help him in Minnesota, which Republicans would like to turn into a swing state; or Gov. Charlie Crist of Florida, who helped McCain win the primary there and recently joined him on an airboat tour through the Everglades.

McCain had a town-hall-style meeting in Ohio with Rob Portman, a former congressman, trade representative and director of the Office of Management and Budget under President Bush. Portman introduced the senator, and the two met privately for half an hour, an adviser to Portman said.

In truth, there are all kinds of names bubbling around in this quiet July in Washington. In some cases, the two campaigns are floating names they have no intention of picking just to appease an ego or a political constituency. And if history is any guide, there might be some names that even in this frenetic round of speculation, no one has considered. At this point in 1988, Dan Quayle was not on many lists of possible running mates for George Bush; indeed, he was not even on the list of some of Bush’s own top advisers.

But if the campaigns have their way, the real lists are not likely to leak out. “I’ve been instructed on the penalty of death that I give no clues as to where the process is,” said Mark Salter, McCain’s close friend and adviser.

Senior advisers to Obama said his vetting team had separated itself from his campaign and political advisers to try to keep any strategic calculations out of the process. Caroline Kennedy and Eric H. Holder Jr., a former deputy attorney general, are running the team.

“We’re not speaking to anyone – this is for Sen. Obama to share at the appropriate time,” Holder wrote in a brief e-mail message. 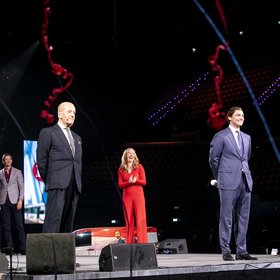