There is no mistaking the goals of this choice – its all about foreign policy experience.

Joe Biden will do the two things Barack Obama believes he needs most: bring foreign policy experience to the fore and serve as a high-level partner in his administration, one that can genuinely help achieve the goal of a more peaceful world.

Obama had some very stark choices in his final selection: go for Indiana and a vice president who represents Hoosier values and balanced budgets, go for Virginia and a candidate who represents change or go for foreign policy experience. Good arguments were made for all three of them. They were all solid choices. But in the end, Obama chose experience in foreign affairs as his central, driving need to win this election and to govern. Barack Obama woke us up at 3 a.m. with his famous text message.

Gore complemented Bill Clinton and projected an image of a new generation to government. He played major roles in setting environmental and technological policy for the country. When George W. Bush was running for president, Dick Cheney satisfied the Republican base while providing Bush, the candidate, with White House experience.

Once in office, Cheney wound up playing major roles in national security if not running it. He leaves office as one of the first vice presidents in recent history to have no presidential ambitions but also as the least liked No. 2 since Spiro Agnew was forced to resign for accepting bribes.

We are again heading for a vice president who, if elected, will be a major and important player in an Obama administration. Selecting Joe Biden is not without its issues, ones the Republicans will jump on. Biden raised questions in the primaries about Obama’s lack of experience, and he voted for the war, undercutting some of Obama’s primary rhetoric on judgment.

But Biden can talk firsthand about Barack Obama’s work on the Senate Foreign Relations Committee and the subcommittee to which he appointed Obama. And while most senators voted for the war, Biden has been a leader in trying to end it.

New fronts are opening up every day on the international horizon that make this a smart and successful choice. The turmoil and explosions in Pakistan underscore the warnings Biden made during the primaries that instability there represents a huge threat to the world. And the conflict between Russia and Georgia is a further indication that the next American president is going to be playing on the most complex international chessboard since the cold war.

Why didn’t Barack Obama choose Hillary Clinton? A lot of voters may be asking him that question in the next few days. And only he can answer that; but his reasons for picking Joe Biden could not be clearer. There is a theory in politics that if you defeat all the objections that people have about you, what is left are those things they love about you and you win. With next Wednesday set as foreign policy night at the Democratic Convention and Joe Biden as the vice presidential choice, Barack Obama aims to overcome all questions about the readiness of his administration so that the voters can believe in the change he will bring. He takes a big step today in overcoming that challenge 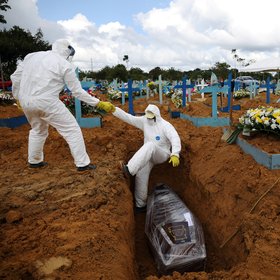