Love in the caliphate, that is a complicated matter. Gailon (45) from Trinidad and Tobago, came to Syria with her husband, as ISIS fighter from the same Caribbean archipelago. Here, she filed for divorce and married a different ISIS fighter. That marriage too, ended in divorce. Why, indeed?

‘Something’s wrong with them. Difficult men.’

Luckily, she also met nice people in the caliphate. Such as the sisters from the Netherlands. When she talks about them, Gailon jumps up excitedly in the pick-up truck taking her through the desert to an enclosed refugee camp in the dead of night. ‘I’ve met many women from the Netherlands here in Syria and they are nice people.’

No, the Dutch people were no longer with her in Shafa, the city she fled last week. It was early on, in Raqqa. ‘We met in the women’s classes. Where we learned Qur’an verses, all new Muslims together. There were five or six Dutch sisters there.’

The Dutch women are not afraid. They say what is on their minds, even in the caliphate. ‘They stand up for you.’ When Gailon wanted a divorce, for example. Where her last ex is now? No idea. While she surrendered last week, along with hundreds of other women from Syria, Iraq, Kazakhstan, Russia and Europe, he stayed behind, somewhere in the Euphrates river valley. The men tried to defend Shafa and the seven villages on the eastern riverbank functioning as the last stronghold of the caliphate.

‘We have defeated ISIS’, American president Donald Trump tweeted last month, in a message announcing the departure of the American military from Syria. ‘Militarily speaking, the so-called Islamic State has been defeated’, Turkish president Erdogan wrote in the New York Times last week. And according to the Dutch former minister of Defence, Jeanine Hennis, now UN envoy in Iraq, the terrorist group may be capable of committing attacks, they are ‘militarily defeated’.

How is that visible there, on the eastern bank of the Euphrates? This area is called MERV in American military jargon, the Middle Euphrates River Valley. A group of fighters dubbed the SDF in the same jargon, Syrian Democratic Forces, a collaborative union of mostly Kurdish and some Arabian militias, has been involved here in Operation Roundup for over eight months. What began as a quick hunt for ISIS kingpins has turned into an arduous war over the last remaining kilometres of caliphate.

From the rooftop of his army post in the village of AL Buqan, commander Serdaşt overlooks the river valley. West of Al Buqan is the city Hajin, where, after months, ISIS appears to have been bombed away since December. And yet, no one dares to use the word ‘liberation’. When in October 2018, the American spokesperson for the anti-ISIS coalition announced on Twitter that the MERV would be liberated quickly, ISIS staged a spectacular breakout around Hajin.

East of the army post is the city Shafa, which the SDF first tried to invade last week. Only at night, because in the daytime, you cannot see the red laser beams of the mines ISIS has laid everywhere. Serdaşt’s men demine by throwing grenades into houses. That goes awry at least once a night.

Is the war over? Serdaşt, a Curd commanding local Arabian fighters, as is often seen in the SDF, is worried. Not about the ongoing battle in the river valley. ‘ISIS still has a small city and several villages. Sooner or later, the area will be recaptured.’ He is more concerned about what is happening on the access roads to the Euphrates stream valley. They were recaptured over a year ago. And yet, ISIS commits fatal attacks there almost daily. ‘My men are not safe there.’

Clouds of smoke rise from Shafa. Serdaşt points to the sky. Western fighter jets carrying out air raids. The air raids are requested by SDF spotters on the frontline. The coalition itself selects targets, among others by means of drones flying over the caliphate. Since Trump announced the withdrawal of his troops, Serdaşt hears more air raids than ever. More than those ordered by the SDF.

‘It’s more than what we ask for. We think it’s the Americans, wanting to end this war quickly. And we agree with that. We want it to be over.’ Later, an SDF spokesperson will confirm that Trump’s announcement coincides with an increase in air raids. The pilots are taking advantage of the clear winter weather by carrying out as many bombings as possible, according to the official statement. ‘Now, they can spot targets. They could not do that during last autumn’s sandstorms.’

Syria, that is ‘sand and death’, Trump said, but the final frontline with ISIS has green meadows and palm trees. In what was once known as the Euphrates gold coast, the extremist fighters have buried themselves in. In the rubble of Hajin, which counts 40,000 residents during peacetime and is now completely deserted, you can recognise the bombed remains of what used to be baroque villas, built by Syrians who made a decent living in the Gulf States.

‘Up until a week ago, everything was fine’, sighs Mervat (30) from Iraq. She’s sitting on a bus coming from the river valley, in between a school boy who was recruited into the ISIS Youth Brigade Ashbal al khilafah, the cubs of the caliphate, crying children and a one-day-old baby. If the air raids had not made it so dangerous, she would have stayed. The State, it was functioning just as well as years ago in the Anbar province in Iraq. ‘Nothing’s changed.’

Everything worked, the other women on the bus affirm. The hospital in Shafa, definitely until last week - the SDF confirm that detail. The Qur’an schools in the Mosques. The hisbah, the morality police feared among residents who were less taken with the State.

Americans, the French and the Britsh

Hard thumps are heard in the direction of Shafa. The Americans as well as the French and the British have an artillery station around the final frontline with ISIS. The SDF, guarding the territory on the ground, does not want to admit journalists. Sometimes Western help goes wrong in this war. On Saturday the 5th of January, Khalil, a 19-year-old SDF fighter, sits next to a heater, recovering from a missile strike in the Martyr Berxwedan field hospital. It started with the Americans, who wanted to help him and his buddies. ‘Very nice. They asked where ISIS was.’

Not Americans, says a colleague. ‘They were British.’

The British opened fire in the direction of Shafa. That did not end well. ISIS struck back with a missile. It did not only hit several British, but also an SDF command post. His friend Bakr, 21 years old and with only a couple months of experience, died. They are from the same city, Kobani, in North-Syria. ‘We enlisted together.’ Now, Bakr lies in an ambulance in a white body bag. Khalil sits in front of the heater, half-deaf from the blow.

The medic at the Martyr Berxwedan hospital, the American Jon Rieth (41), watches it all with resignation. Ordinarily, Jon works as an ambulance paramedic in Syracuse, United States. He regularly takes time off to provide medical care as a volunteer in the battle against ISIS. First in Iraq, now in Syria. He arrived here on 21 December, days after Trump announced the departure of the American military.

The American army base is practically next to the hospital. British and American medics provide the first relief on the frontline. Their first meeting was awkward. The Americans, sometimes special forces, find it odd that he, Jon from Syracuse, travelled to Syria voluntarily to help. The first time he was on the frontline, one of them said: ‘I need to take your picture. To see if you are one of the good guys.’ The soldiers only ever give their first name. Never their last name.

But recently, one of them gave Jon a granola bar out of the blue. ‘That was nice.’ He knows they are baffled that they are being pulled out of Syria. The soldiers respect his medical knowledge. And let’s be honest: it’s just cool. ‘Like a movie’, says Jon. ‘I have many friends working at grim battle fronts, but no one works with special forces. That’s what we all wanted to be.’

Outside, we hear the honking of an ambulance. A 23-year-old young man is driven in on a gurney. Jon can already tell: his skin is blotchy. He checks his carotid artery for a pulse. Nothing. Pro forma, he listens to the heart with his stethoscope. Shakes his head. Says one word. ‘Martyr.’

An SDF colleague, who is mildly injured, bangs his hand against the door in anger. They have the least appealing job in this war, provisioning. And they were not even at the front. They were driving on a road that leads to the river valley, which was retaken more than a year ago. A motorbike was parked on the side of the road, without a driver. When they drove past it, it blew up. ‘We’re seeing more and more of these kinds of attacks’, says Jon. ‘ISIS doesn’t have the people for large-scale ground offensives anymore, but they do have the people for this. The psychological consequences to the population are immense.’

A day later, Syrian Hamed, 16-years-old, boards the bus full of fleeing women. Her husband brought her to the frontline. Then he turned around, back to the caliphate. Because of his job, he cannot be spared. ‘He repairs motorbikes for the State.’ 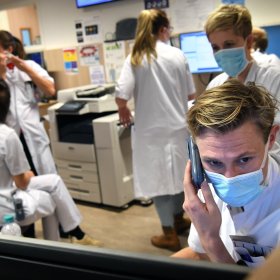