Kurt Westergaard (72) became a political cartoonist late in life. His parents made him get a real job first. 'They used to say that if I was a teacher, I would have the whole blackboard to draw on every day.' As a teacher and later as a head teacher, he drew illustrations for schoolbooks for handicapped children. 'Learning by doing was the philosophy.'

No, Westergaard has no regrets. He wouldn't do anything differently even though he now knows that there are people who want to kill him, more than two and a half years after the infamous 12 cartoons were published in Jyllands-Posten. He still draws every day. He turns to the opinion pages with his cartoon: KW.

– Did you expect this 'second' cartoon crisis?
Westergaard laughs sarcastically. 'Nobody expected this. After the riots in 2006, the deaths, the 5,000 hate mails and the false bomb alerts the paper received, the cartoons were history. But now, papers that were critical at the time have also printed the cartoons. That meant a lot to me, and to Jyllands-Posten. The papers are standing shoulder to shoulder. Jyllands-Posten is a liberal newspaper. People who don't agree with us call us conservative, nationalist even. But we don't run away from a debate. We have always responded to religious obscurities. That's not always easy for the Christian readers we have. I have received messages of support from all over the world. People offer me their homes, in Germany, Israel, the Faeroe Islands.'

– But there have also been unfavourable responses. You had to leave the hotel you were staying in. Your wife was no longer welcome at the kindergarten where she helped out.
'When that happened I did wonder whether we were still welcome here. But the hotel's decision was taken by someone in Brussels. Some years ago in Amman, Jordan, people died when a wedding party was attacked at one of the chain's hotels. And two overzealous civil servants in Århus thought my wife would put the crèche in danger. They apologised later. There is a lot of support for us here, and there's no objection to the costs. Security is expensive, I realise that. It takes 13 people for me to have one bodyguard. How is it with Ayaan Hirsi Ali by the way?'

– Guernica or a bomb in a turban, does everything really have to be said?
'Yes, that's the way we do it here.'

– Even if you know it's offensive?
'Offensive? That's something they'll just have to learn to live with. Politicians are insulted by cartoons every day. We live in a tolerant country and we can do that. Anyone who lives here must accept democracy the way we do it. In Europe, we didn't give in when the Nazis and fascists threatened us or when the communists were at the door. Another totalitarian force is attacking us now. Not the Muslims as a group, of course, but a handful of radicals. You don't give in to them. I am an atheist but I'm not anti-religion. Muslims as a group must realise that religion is a private matter.'

– Aren't you afraid of polarisation?
'If it hadn't been the cartoons, it would have been something else. It was inevitable. The cartoon crisis was a catalyst in a process of adaptation between Muslims and ethnic Danes. There's friction between two cultures: the democratic Danish culture and the religious Muslim culture. The tension will last for many years to come. But the Danish, the west European culture will win.

'Have you heard the joke about a country in the Middle East that has got a rocket to attack the West. When they come to fire it, it won't leave the ground. There are too many people holding on to it so that they can go to the West. And that's the way it is. Muslims want to live here because we have got such good public services. In that respect, this second crisis is a setback for integration. Danes who are tolerant will become less tolerant. The ordinary Dane will wonder why they have come here and we know the answer: the prospects are much better here.'

– There is a fear in the Netherlands that the riots will be repeated, but this time against the Dutch. The film hasn't been released yet but flags have already been burnt in Afghanistan, Danish flags as well.
'I'm very, very sorry that people suffered. But we – I – can't accept any responsibility for what happened. The riots in 2006 were incited by regimes that can't satisfy the needs of their own people. That's where the problem lies, not with us. I wonder just how religiously aware all those young men were. Most of them hadn't even seen the cartoons.

'Muslims have to stop seeing themselves as victims. We've made mistakes, too, I won't deny that. Politicians, including those on the Left, have failed. But that's changing and most Muslims live a very decent life here. They are accepted and we need them. But they have to understand how democracy works and they have to accept our system.'

– Not every Kurt Westergaard is happy.
The cartoonist bursts out laughing. 'No, apparently there are about 16 people called Kurt Westergaard living near here.' Then seriously, 'It is very bad that other people are also being threatened. I said on television that if they want to threaten anyone they should threaten me. I'm the only real one.'

– And you're not scared?
'No,' he repeats, very definitely. 'No. You have no choice but to be brave and you get used to it. It helps that my wife is so supportive. She has never said I shouldn't have drawn that damned cartoon.

'But what does scare me, really scare me, is the role of the Muslim elite. The spokesman for the largest Muslim organisation says that Jyllands-Posten is in the hands of dark Jewish forces that will close the paper down if we don't criticise Muslims. Or the Afghan foreign minister who comes to thank us for our support and soldiers in Afghanistan but talks about extremists in Denmark being of the same calibre as Osama bin Laden. And he's talking about us! If that's how the elite think, what must the ordinary Muslim be thinking?'

– And that damned cartoon?
No, no, no, I am not sorry. I still draw what and how I want to. But this will never end. I have accepted that I will have to live the rest of my life under the protection of the Danish security service.' 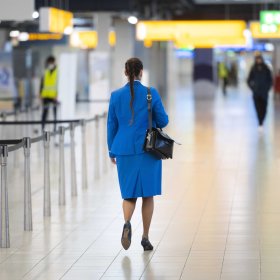