But this state, famous for its libertarian mojo, has shifted so hard toward the Democrats in recent years that no place may be more emblematic of a national political climate in which Republican incumbents like Sen. John E. Sununu are battling to keep their jobs.

With Democrats gunning to expand their control of the Senate, Sununu, whose seat has been in Republican hands for 30 years, faces a grueling rematch against former Gov. Jeanne Shaheen. It is a contest in which eagerness to replace President Bush looms large and voters say the battered economy is their chief concern.

Such sentiments, reflected in opinion polls across the country, are fueling the Democrats’ belief that they can oust Sununu and fight competitively in up to 10 other states in a quest to push their slim 51-49 Senate majority as close as possible to a filibuster-proof 60 seats – a goal they rank second only to Sen. Barack Obama’s winning the White House.

The presidential race will also be a big factor. Since the first Sununu-Shaheen contest in 2002, New Hampshire Republicans have lost an 11-point edge among registered voters. Each party now has 31 percent of the electorate, with 38 percent undeclared. In the state’s presidential primaries this year, 62 percent of independents who voted chose a Democrat.

Still, beating Sununu will not be easy. At 43, he is the youngest senator and, many of his colleagues say, one of the smartest. An MIT-educated engineer with an MBA from Harvard, he may be a symbol of Republican vulnerability, but he also represents incumbency’s inherent advantages, not the least being his $5.1-million war chest.

Shaheen, 61, who in 1996 was the first woman elected as New Hampshire’s governor, is an archetype of the high-profile candidates that Democrats have put forward this year in hopes of seizing on a built-in numerical advantage: Republicans must defend 23 Senate seats, including five left open by retirements, while Democrats have just 12 seats up with not a single vacancy.

Besides Shaheen, other Democrats seeking seats in the Senate this year include two former governors, Mark R. Warner of Virginia and Ronnie Musgrove of Mississippi, and Reps. Mark Udall of Colorado and Tom Udall of New Mexico, who are cousins. And in Alaska, the Democrat Mark Begich, the mayor of Anchorage, is now favored to knock out the Republican incumbent, Sen. Ted Stevens, who was indicted by a federal grand jury last week on charges of failing to disclose more than $250,000 he received from an oil services company. Sen. John Ensign of Nevada, the chairman of the National Republican Senatorial Committee, has said it would be a good election night if his party lost only four seats. Democrats are betting on a bigger bounty. “New Hampshire is one of the five seats we expect to win,” Sen. Charles E. Schumer of New York, the head of the party’s campaign efforts, boasted at the Capitol last week.

The race here with Sununu and Shaheen is shaping up as a bare-knuckle bout featuring two veteran, polished candidates, who know the terrain – and each other – well. It is also likely to be heavy on policy, with clashes over the economy, energy policy, health care, the Iraq war and national security, and their respective records in Congress and the State House.

With the presidential race as a backdrop, the Senate candidates must appeal to voters in a state where consumer confidence is falling and economic anxiety is high, despite blossoming high-tech and health care industries that have kept unemployment relatively low.

So far, Shaheen seems to have an edge. She has been ahead in the polls for more than a year, often by double digits, though one recent survey had her up by just four percentage points, a statistical dead heat.

Her campaign has also been spending more than Sununu’s and has just $2.1 million left on hand, according to the most recent campaign finance reports. National Democrats are expected to spend heavily on her behalf.

Sununu, projecting supreme confidence, has only recently begun to campaign in earnest and is said to be readying an advertising blitz for after Labor Day, when voters are likely to begin paying more attention to the race.

He may also benefit from sharing the ballot with Sen. John McCain, who won the Republican presidential primaries here in 2000 and 2008. Shaheen is now coordinating with Obama’s campaign.

“It’s probably the best test out there of a political climate being a Republican incumbent’s worst enemy,” said Jennifer Duffy, senior editor of the nonpartisan Cook Political Report. “He does constituent service. He shows up to work. He votes. He brings home the bacon. There are not a lot of inherent things wrong with John Sununu except that he is a Republican.”

Felicia Concepcion, 32, a jewelry store owner from Hudson, N.H., said she had no complaints about Sununu but would not vote for him. “I don’t think he’s too bad,” Concepcion said. “But with the economy going the way it has been going the last few years, nobody in any office looks too good right now.”

Sununu, whose father was a White House chief of staff under the first President Bush, portrays himself as an independent voice for New Hampshire who stood up to the current president in numerous legislative battles, like arguing for changes to the Patriot Act and blocking the administration’s 2003 energy plan.

“That kind of effective leadership will be contrasted – by the media, by me, by others – to the things she failed to do as governor,” Sununu said in an interview, referring to Shaheen.

Sununu said she failed to deal with the state’s education financing problems, an ongoing issue, and he also attacked her handling of tax policy. “She raised spending to record levels, which I think people have come to expect from liberal Democrats,” he said, “but also she signed our statewide property tax into law and tried to give the state a sales tax which would have really devastated our economy.”

Shaheen, meanwhile, said that Sununu sided with the current president in 90 percent of his votes in Congress, against the interests of constituents at home, and she has put forward her own plans on fuel costs, the economy and the environment.

“The policies of George Bush and John Sununu have been out of step from where the voters of New Hampshire are,” Shaheen said in an interview. “When I am out on the campaign trail, talking to people in New Hampshire, I don’t hear people say we need to elect a Democrat. What I hear them say is we need to change the direction of this country.”

She also constantly reminds voters of Sununu’s close ties to prominent Republicans like Stevens, who raised money for him in Alaska. The Sununu campaign has said it will donate $10,000 that it had received from Stevens to charity.

Sununu has also been a frequent target of Senate Democratic leaders, who at times structure votes to put Republicans in a political bind. He shrugs off the tactic, saying, “What’s important is that you cast a vote that is based in principle.”

Neither Shaheen nor Sununu is an electrifying campaigner. He looks like an engineer with a preppy wardrobe and seems to sprint everywhere he goes. She, once a high school English teacher, favors colorful suits with high necklines and pearls, and has short hair and a kindly but serious demeanor.

When they first ran against each other six years ago, Shaheen was a three-term governor, and Sununu was a three-term congressman and a rising star in the Republican-controlled House. American troops had not yet invaded Iraq, and Bush, who was popular then, campaigned for him.

Sununu won 51 percent to 47 percent, by a margin of 19,751 votes. A Republican also won the governorship that year.

Since then, however, the party’s strength in New Hampshire has dwindled.

Although the state’s senior senator, Judd Gregg, a Republican, easily won re-election in 2004, the Democratic presidential nominee that year, Sen. John Kerry, carried the state, and John Lynch, a Democrat, was elected governor. In 2006, Democrats rode a wave of discontent to a massive sweep of local and federal offices. Lynch was re-elected in a landslide, and Democrats took both congressional seats and picked up more than 100 seats in the state Legislature.

Some analysts believe that the 2006 cycle was an aberration and that Democrats were helped by the ability to vote a straight ticket for one party, a longtime practice in New Hampshire balloting that was ended this year.

But even without the straight ticket, Mike Caulfield, a co-founder of bluehampshire.com, a political Web site, said he expected Shaheen to win.

“People kind of treasure their indecision,” he said of New Hampshire residents, who relish their quadrennial role as hosts of the first-in-the-nation primary. “They kind of hold on to it much longer than people in other places might. But if 2006 is any guide, the independents will break very hard for the Democrats.” 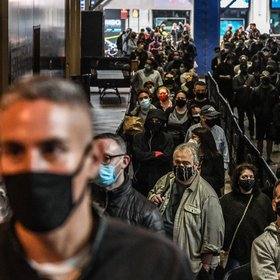