It came to no surprise that the British royal baby was to be named Archie. Our columnist Aaf Brandt Corstius predicted the name in Tuesday’s column. Below you can read an English translation.

Perhaps we all know the name by now, or maybe not, but the Dutch daily newspaper Algemeen Dagblad already held a poll about it yesterday. Readers had to complete the following sentence: “Harry and Meghan will name their son ….” A list of possible names was provided: Spencer, James, Arthur, Philip, Alexander, and ‘other name’.

Spencer was the bookmaker’s favourite, being Lady Di’s maiden name.

In the absence of a name, the baby was called Baby Sussex, which is actually quite a good name for a modern, famous baby. Place names and compass points as baby names are very hip among celebrities – North, Madison, Brooklyn, Paris. So why not Sussex?

However, my guess is that Harry and Megan have checked all those polls and bookmakers and have crossed all the names they came up with off their list, to then choose the only name on earth that others had not yet thought of as a good one for their baby. Which is Archibald. Archibald it will be, mark my words. But anyway, maybe it has already been announced when you read this, but then I will still have predicted it yesterday.

What strikes me, by the way, is how creative the media remain since the baby’s arrival. First they enjoyed months of speculation about the baby’s sex, the colours for the nursery and whether vegan paint would be used for the walls, about the issue of giving birth at home or in a posh hospital, and now they open up an entire new can of facts, ideas, future concepts, and possible scenarios for when certain dead individuals would still be alive to visit the baby.

Diana’s ex-butler, for example — always interview the ex-butler! — was absolutely sure that Diana would have taken charge of the baby as a true grandmother hen and that Meghan’s mother Doria wouldn’t have had the ghost of a chance. The Daily Mail, who brought this story, also reported that the Prince Without Name was the only person on earth who theoretically could become both the King of England and the President of the United States. That’s some pressure, if you’ve only lived for half a day, to have your future burnout already spelt out for you.

The Sun decided to do a good old-fashioned photo shoot at the Portland Hospital, where Megan is supposed to have had the baby – a place where the rooms have coolers with not one but two bottles of champagne at the ready and where a cuddly toy panda bear awaits you on each of the tightly made beds.

The cuddly toy panda bear: that’s the one the tabloids should get a hold of in the next few days. That bear literally knows everything! 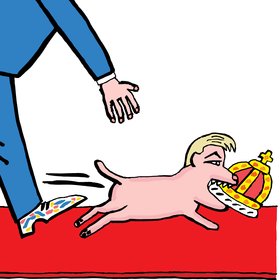